Thornhedge was built to impress, and it still does.

Enter the heavy front door flanked by wide glass panels and enter a world where scale was large, and drama was king.

The crown molding is deep and ornate. There are five fireplaces on the first floor. The floors are quarter-sawn oak. Throughout the first floor leaded glass windows sparkle like ice, and carry a wreath motif which has become the Thornhedge symbol. The large entry has a massive stone fireplace and a wide public stairway leading to the guest rooms. The back stairway is a bit narrower—and was designed for keeping the servants out of sight.

Thornhedge was built in 1900 as a summer cottage by Lewis Roberts, who, with his two brothers, had owned a publishing firm in Boston, Massachusetts. They published work by authors including Emily Dickinson, Fyodor Dostoyevsky and George Sand, the first American edition of Treasure Island by Robert Louis Stevenson, and had their greatest commercial success with Little Women by Louisa May Alcott. The business was purchased by Little and Brown Publishing in 1898.

Lewis Roberts died in 1901, only a year after completing Thornhedge, and the house came under the care of his son, Lewis Niles Roberts. Lewis staged elaborate parties for members of Bar Harbor society. One event included a musicale featuring performances by members of the Boston Symphony Orchestra. This concert was hailed by the Society page of the New York Times as “...by all odds, the most swell and expensive private entertainment given at Bar Harbor this season, if not any season.” Every corner and niche of the first floor was filled with clusters of American Beauty roses and rare ferns and exotic palms decorated the halls and parlors. The music programs alone cost upwards of one thousand dollars to produce.

Mr. Roberts kept the house as a summer residence until 1920, then sold it to the family of William F. Frick, a prominent judge from Baltimore. In 1930 Thornhedge passed to his grandson, Dr. H. Warren Buckler, who sold it to Stanley J. G. Nowak, a doctor from the Boston area, in 1937. Nowak was a popular physician among the wealthy summer visitors and it became necessary to convert parts of the house into examination rooms and offices. Nowak, his wife Helen, and their family summered at Thornhedge until 1976 when Elinor and Alonzo Geel purchased it. The Geels restored and converted the house to an inn. Thornhedge Inn has been in operation ever since and is now owned by the Geel grandchildren, Andrew and Robert.

Thornhedge is a Queen Anne shingle style cottage with eleven guest rooms. Originally, the house was essentially split in two, with the first and second floor serving as the living quarters and the top and bottom floors for the servants. The laundry, servants dining hall, and kitchen were out of sight in the finished basement, with a dumbwaiter to bring hot food to the butler’s pantry. The third floor was the servants’ living quarters.

In the dining room the silk wall coverings date back to the 1920s. The grand salon features an alcove with capital columns and furniture collected from summer cottages in the Bar Harbor area by the Geel family over the years.

Summer cottage, physician’s home and office, public inn, whatever role the Thornhedge plays, it plays with elegance and grandeur. 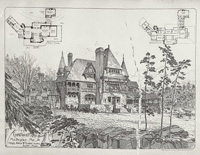 Joeseph Pulitzer built a four-story stone tower so his bedroom would be quiet. About Chatwold
map of location207-288-5398rates andavailability
207-288-5398